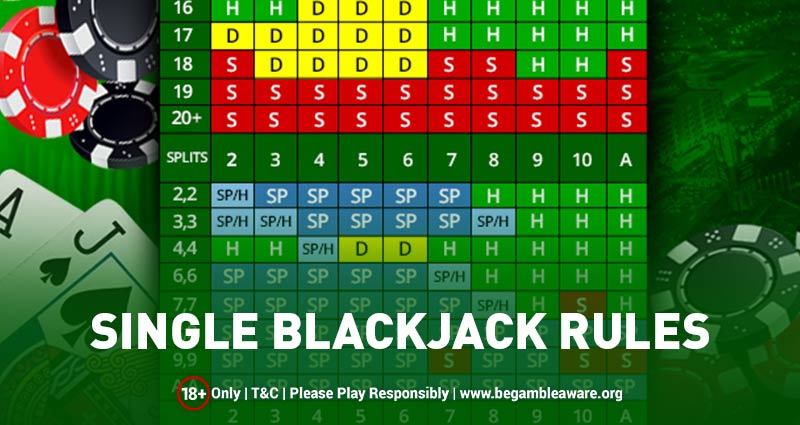 Perhaps the most popular of casino games, Blackjack is certainly preferred by gaming enthusiasts all around the world. There are a lot of reasons to love Blackjack right from the simple gameplay to it being a player-friendly game for a change with the lowest house advantage. We aren’t saying that it is easy to win at a game of Blackjack, but if you have the knowledge, the skill and a few solid strategies up your sleeve, the chances of winning are good. Thus, the simple style of playing, the exciting fast pace and the good winning chances make this casino game so popular.

Just like every casino game this one too has numerous variants, one of which is the single-deck Blackjack. As the name suggests this is the game of Blackjack that is played using only a single deck of playing cards. Apart from that, it is very much similar to that of the original game. The game is played against the dealer instead of among the players, and the objective of the game is to either get a value of 21 or anything close to 21 but more than that of the dealer without going bust. Alternatively, the players can also stand until the dealer busts.

The deal with single deck blackjack is the deck of cards are shuffled only once at the beginning of the session. Apart from that, it is again similar to the original game. The game begins with players placing a bet after which the cards are dealt. The players and the dealer get 2 cards each; while the players’ cards are dealt face-up one of the cards of the dealer is dealt face-up and the other face down. The players have to determine their next step depending on their hand and the face-up card of the dealer.

How to play single-deck Blackjack

Just like the original version of Blackjack players have a number of options of how to play the single deck version. single-deck can stand or hit. This means that players can either stop drawing cards or they can opt to draw cards. Additionally, they can double down, split their cards and place another bet. The next step the player picks ultimately depends on the cards they have and the cards the dealer has since the ultimate aim is to have a better hand than that of the dealer.

Why single-deck Blackjack is popular?

It is no exaggeration to say that single-deck Blackjack is popular with the masses, and there are many reasons for this popularity. But ultimately, the best reason why this form of the game is preferred is that players have better chances of winning. There are two reasons for this too; firstly, the house edge for the single-deck game is as low as 0.15% which is absolutely attractive. Secondly, it is a single deck game card-counting and, hence, taking the right decision to ultimately win becomes easy.