Home / Blog / What is a Slow Roll in Poker and How It Violates Poker Etiquette?

What is a Slow Roll in Poker and How It Violates Poker Etiquette? 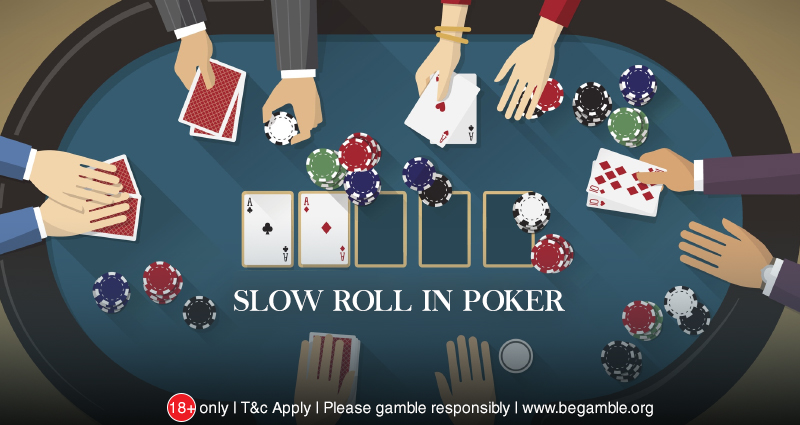 Playing Poker may be a fun activity to spend time on, but it isn’t always a peaceful affair. Players sometimes express emotions at the table, and it can get pretty heated every once in a while. It is the nature of Poker. While frustrations may overflow during a Poker game, it is also one of the most famous games that attract millions of players each year.

Although the main target of the game is to divert the opponents from their game, some limits should not be crossed. Slow rolls are one of them. Pulling off one can attract lots of hatred from the opponents.

What is a Poker Slow Roll?

If you are a regular player at a Poker table, you must have seen a slow roll. It is when a player knows he/she has the best possible hand yet refuses to reveal his/her hand within a stipulated time period.

For example, you have a king and joker of diamonds, and three back-to-back diamonds are in the river. You made a bet, and the opponents had the calls. As your opponents didn’t raise, it’s guaranteed that you have the winning hand with you. In this scenario, instead of showing your hand, you choose to wait for the opponents to reveal their hand with the hope of winning.

Why is it a Bad Practice?

Some people might disagree. After all, a slow roll is a fun gimmick to perform. It messes with other player’s heads, making them lose their calm and eventually affecting the future results. However, it still is malpractice that should not be applied in Poker.

In every sport and game, respecting your opponent is a must. When you know the fact that winning cards are at your disposal, then you should reveal it straight away. Instead, if you choose to tease your opponents by giving them a false belief of winning, you will be labelled as a trickster who loves annoying others.

Players who like slow-rolling will often justify their actions by stating they aren’t breaking any rules. This is correct in theory. There isn’t a defined time period to show your hand during your turn. So, you can’t be given an official penalty for doing a slow roll.

However, some Poker managers may not like a player disrupting the play with multiple slow rolls. He will warn you for the first offence. In the subsequence offence, you might be handed a penalty by the manager. Most of the Poker room managers don’t appreciate actions that may build tension among players. So it’s for your own good to keep a distance from slow rolls.

How to Prevent an Unintentional Slow Roll?

Sometimes accidental slow rolls happen when a player misses a piece of information or two. This thing occurs mostly to the multi-tabling players. Their focus may be diverted because of the results in the other tables. However, there are some practices to avoid unintentional slow rolls.

You can possibly assume what your opponent got. If they are acting nicely with you, it’s your turn to return the favour by not pulling a slow roll.

Should You Ever Perform a Slow Roll?

The answer is yes if you are playing the game with your friends. Slow rolls can contribute to fun elements when your opponents are your buddies, and they won’t mind much about it. But, if you are playing in a casino full of strangers, you shouldn’t think of it.

The main point is, slow rolls will establish you as a jerk who gets satisfied annoying others. You may put on “I don’t give a damn” face and continue pulling stunts similar to slow rolls. But, these evil doings won’t contribute to the win rate. Instead, people will avoid sharing tables with you, nor they will interact with you in a friendly manner.

So, the bottom line is, you should never act like an over smart schmuck in a competitive environment. Keep your game exciting and productive by following a strategy of your own. But, that strategy should never include a slow roll. That’s all for today. Follow us for the upcoming gambling-related articles.

Name: What is a Slow Roll in Poker and How It Violates Poker Etiquette?