Home / Blog / What is The Paroli Roulette System and Does it Really Work?

What is The Paroli Roulette System and Does it Really Work? 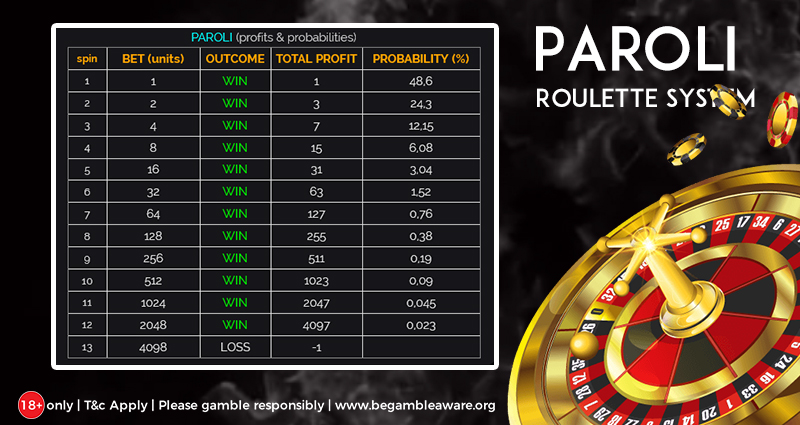 The Paroli System is a betting strategy that you can use in online Roulette or any other casino game. It offers players the chance to win a handsome amount of money without having to bet too high. Many players claim that the Paroli is not frustrating and it enables them to maintain a positive attitude even in the case of losing – facts that are quite unimaginable for Paroli’s counterpart system, the even more popular Martingale System. Still, the Paroli System is used by players looking for winning in the long run.

How Does It Work?

The Paroli Roulette Strategy is based on the theory that both wins and losses come in streaks. Therefore, the assumption here is that players can increase their profits by wagering higher amounts during winning streaks and decreasing their bets to the decided base bet during losing streaks. Moreover, this system guarantees that no more than a single unit is risked in the process. This is due to the fact that larger bets are made possible by units which are won from the house. Hence, each time a series of three wins occur, the profit is seven units which cover the small losses made.

How to Use the Paroli Betting System

Using the Paroli Betting System is pretty simple and it doesn’t take too much time to learn and master the strategy. If you’ve never used it before in any casino game, let’s break it down for you.

Decide Your Base Stake

Double Up After a Win

When using the Paroli Roulette System, you must stop doubling your bets after three consecutive wins. You should bet with the amount that you’ve decided as your base stake at the start of the game.

Bet Your Base Stake After Losing

After you’ve lost around while playing Roulette, you must lower your bets back to the base stake.

Is This System Worth Using?

Overall, Paroli is perceived as less risky by its followers. This is due to the fact that large bets are made using the money won from the casino instead of the player’s own bankroll. On the contrary, followers of the conventional Martingale System use their own money to place bets after huge losses. The Martingale System is known as a negative progression system which results in more losses than wins.

Why the Paroli System Doesn’t Work?

Each and every spin in the game of Roulette is an independent event. So, if you place 3 different bets of £5, £10, and £20, all you’ve done is made 3 different bets on 3 different spins. It makes no difference is these bets are made by a single player or multiple players. It’s important to keep in mind that the wheel doesn’t know who is betting money. It has no intelligence and winning numbers are generated merely from cause and effect.

When using the Paroli System, you can expect lots of little losses and a few big wins that statistically will balance out in the long run. However, this is a theoretical concept and in reality, everything might work completely against you. Although the losses are quite small as compared to the Martingale System, the truth is that you won’t be making much of a profit using the Paroli System in the long run.

Name: What is The Paroli Roulette System and Does it Really Work?